Does it really make a difference?

A detailed scientific study into the effects of sex on sporting performance.

Pro athletes have a lot to think about; following a strict training plan, watching what they eat, meeting press responsibilities and running their social media profiles, all with a view to being at their physical and mental peak when it matters most.

But what about sex?

Does a strict abstinence rule have a positive or negative impact on performance on the track? Is there a way of integrating a regime of sexual activity into your schedule to give you a competitive edge?

Many studies have been conducted on the subject, but the results are often far from conclusive. So we decided to run our own.

Enlisting the help of world-renowned expert and coach of Olympic and professional athletes Dr. Mike Young, PhD, we tested 21 male and female collegiate and national athletes over the course of three weeks. Their sexual activity - either with a partner or by themselves - was monitored alongside performance in speed, strength and agility exercises.

The results are fascinating, with notable physiological and psychological effects.

Taking on board some of the lessons learned could help athletes heading to Rio 2016 come home with a medal around their necks. 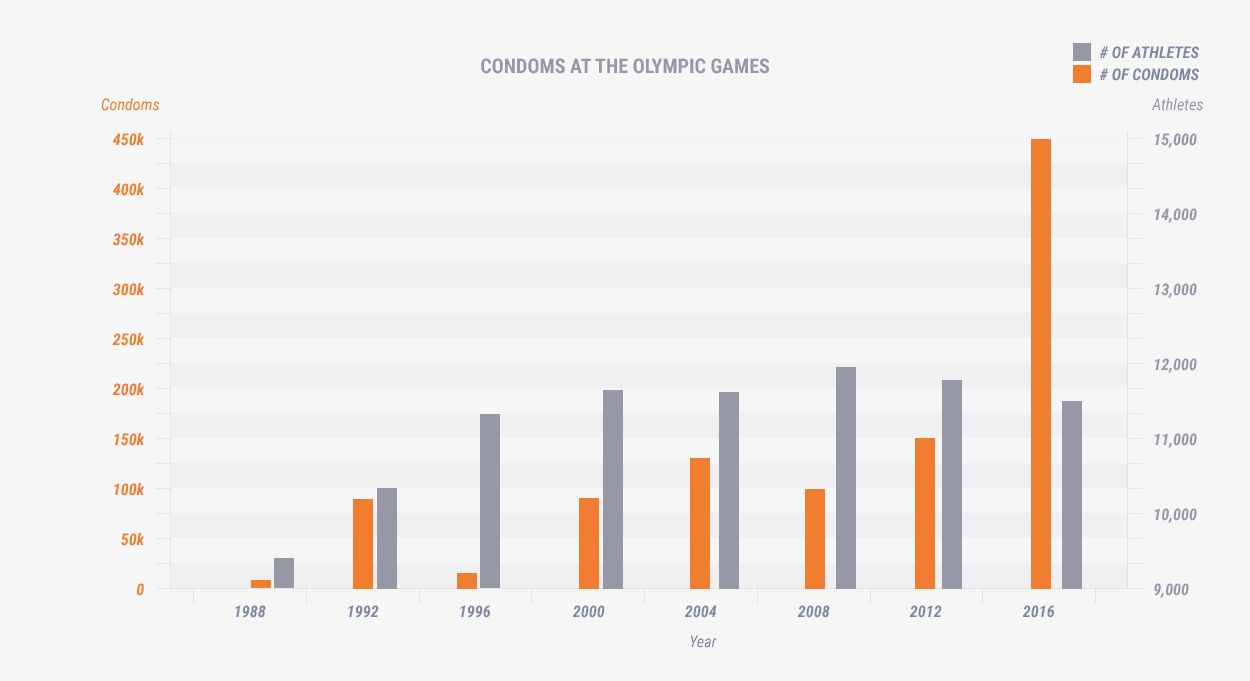 “The Barcelona games was as much about sex as it was about sport. I got laid more often in those two and a half weeks than in the rest of my life up to that point.”

“No matter what your type, the Olympic Village can cater to it, providing the best physical examples on earth.”

“There's a lot of sex going on at the Olympics. I’ve seen people having sex right out in the open, getting down and dirty on the grass, between buildings.”

The more you indulge, the more specific athletic attributes can be enhanced

Our study has shown that those who partook in sexual activity on a more regular basis prior to testing demonstrated an improved performance on average: 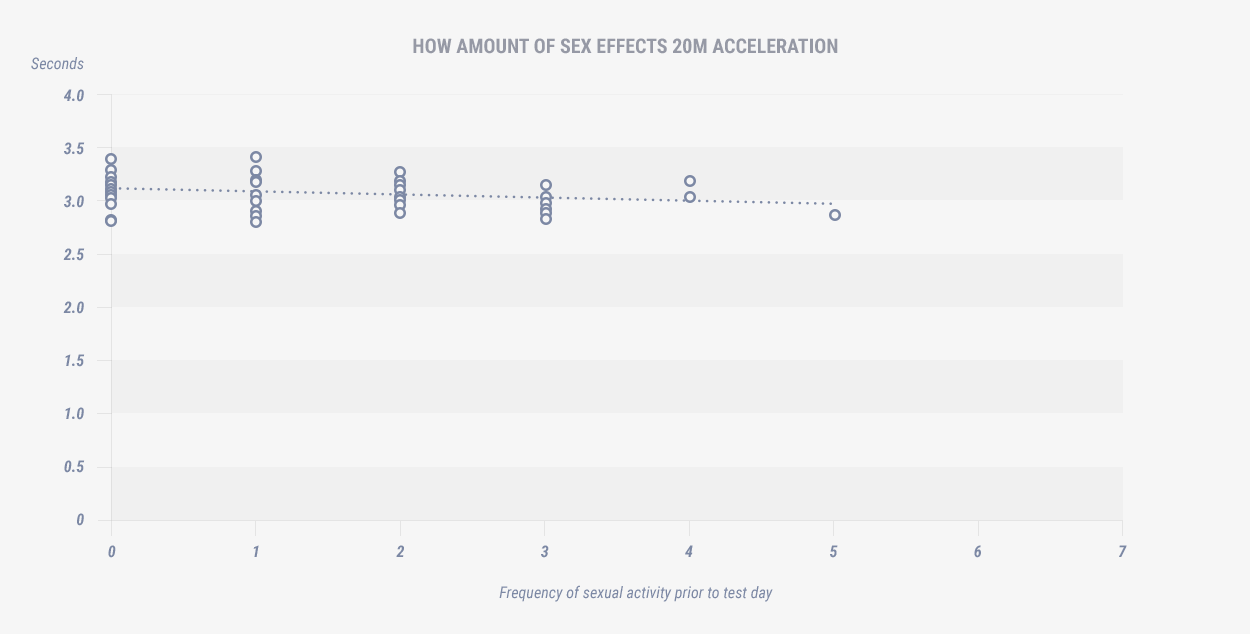 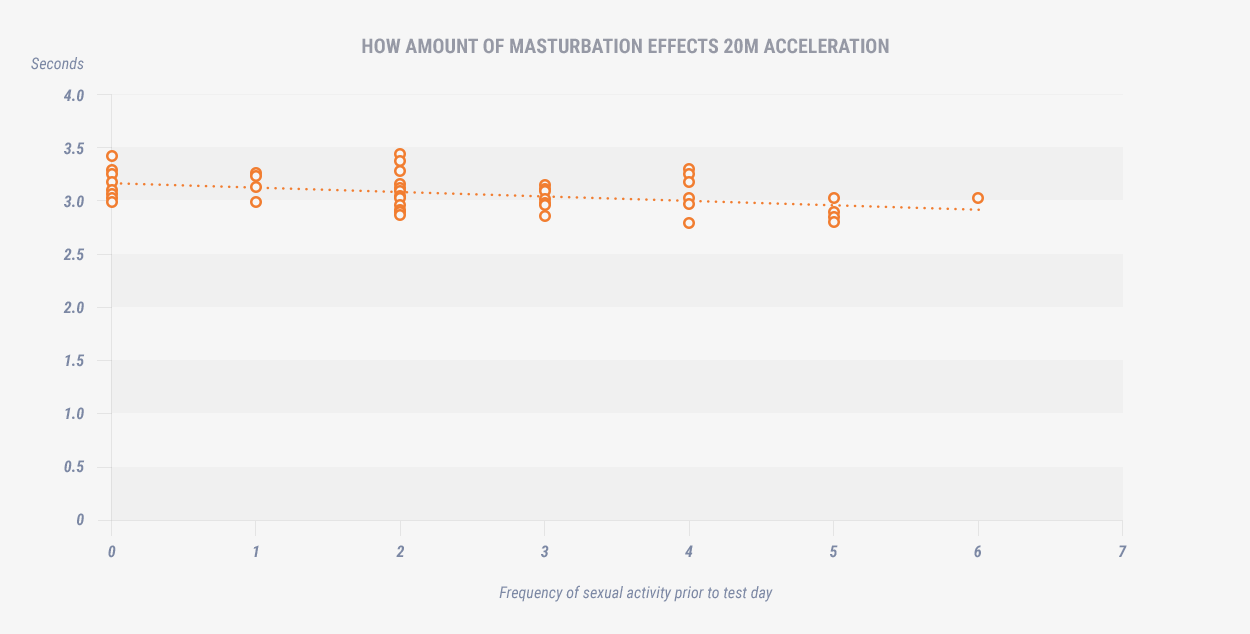 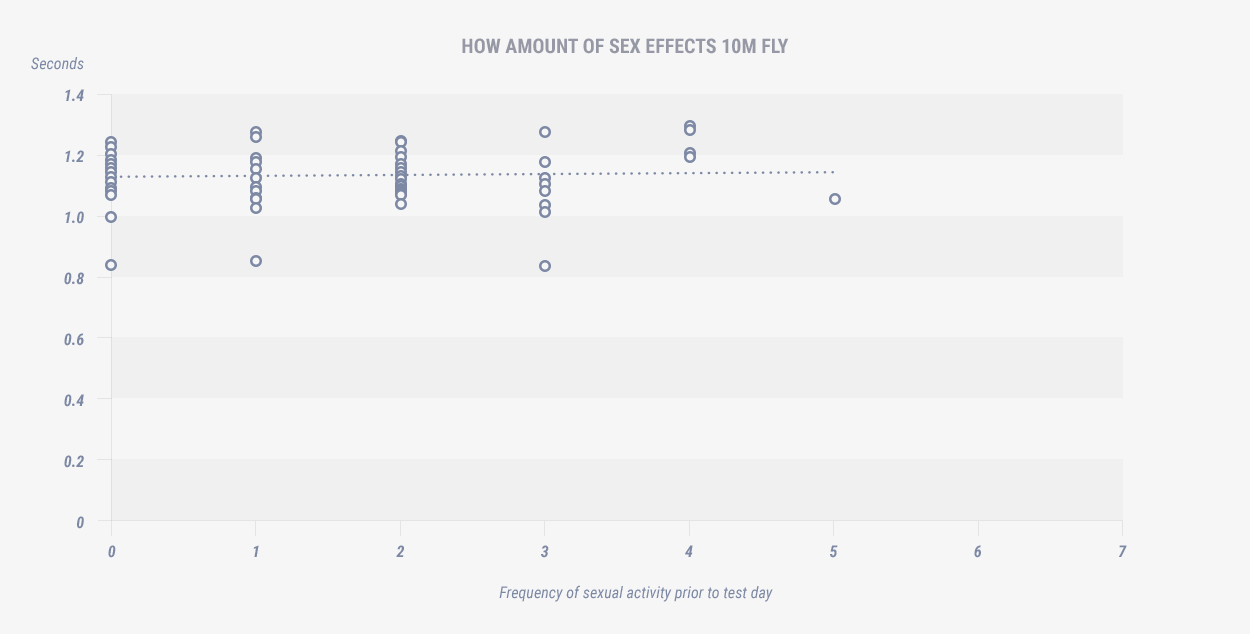 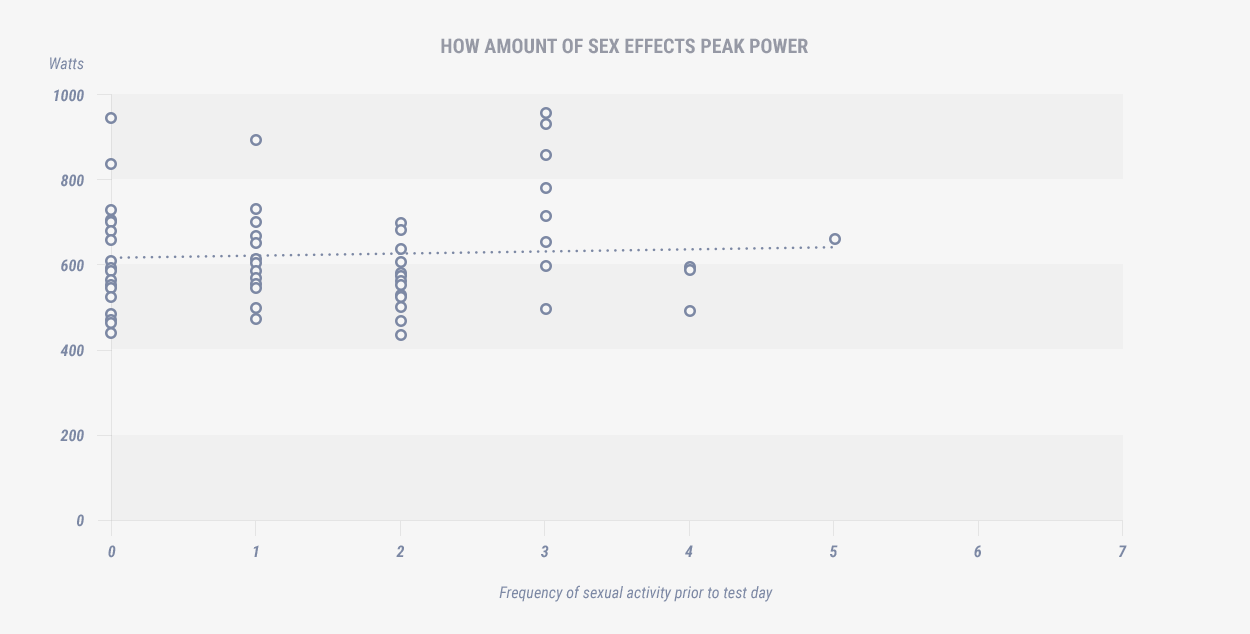 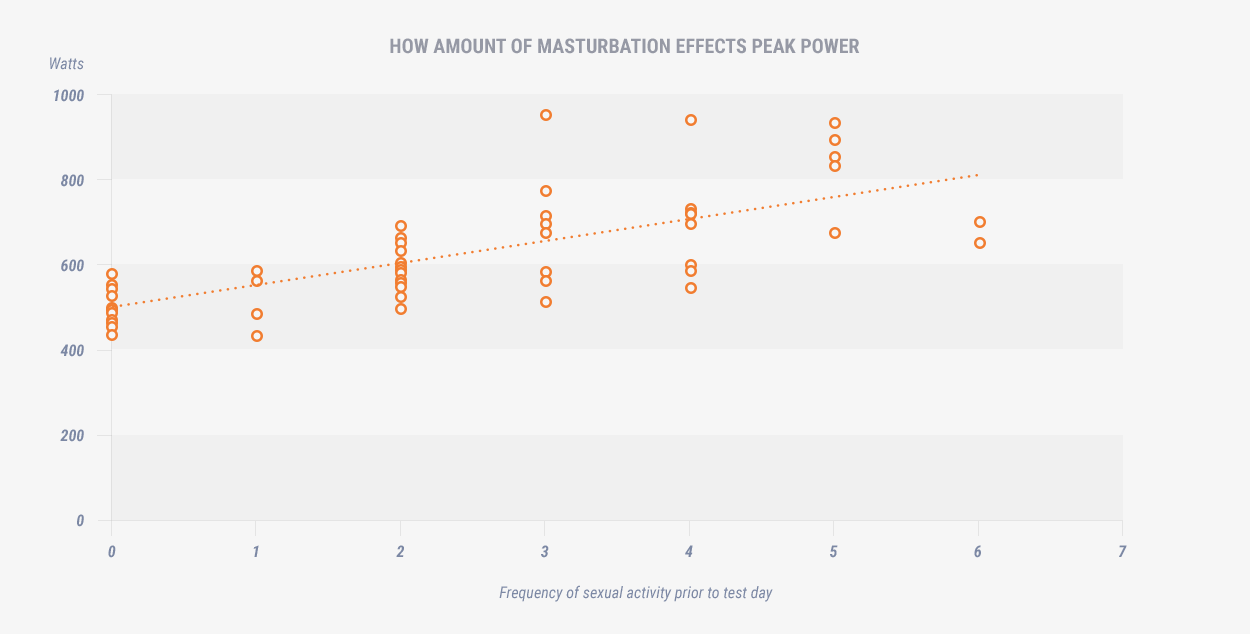 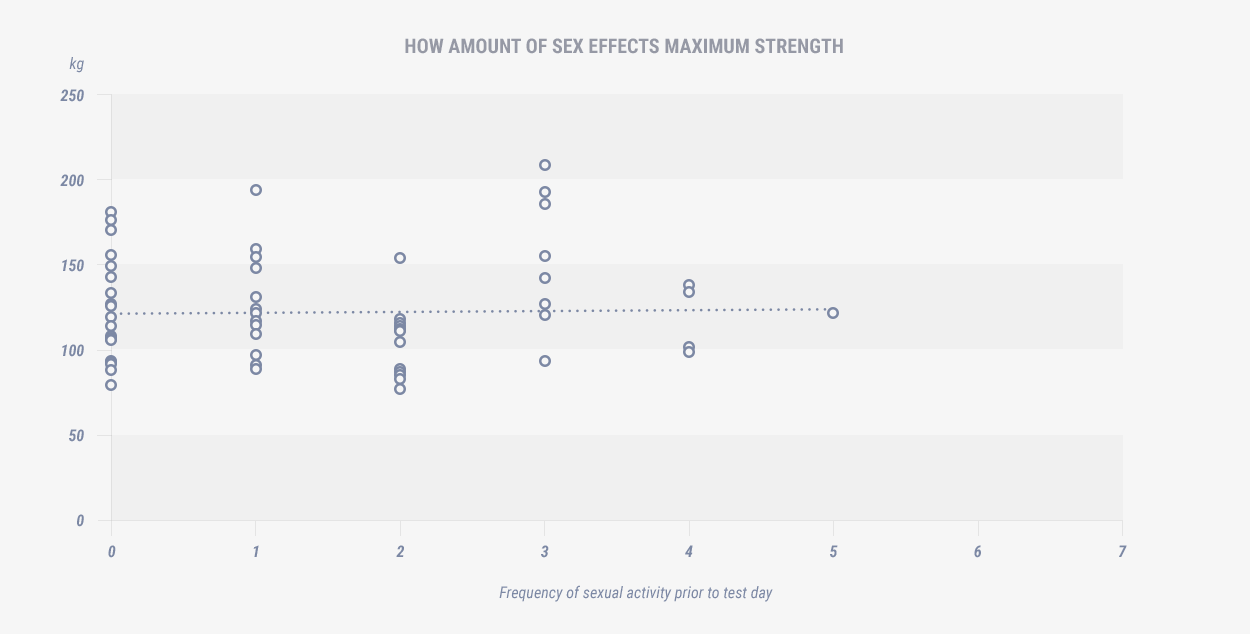 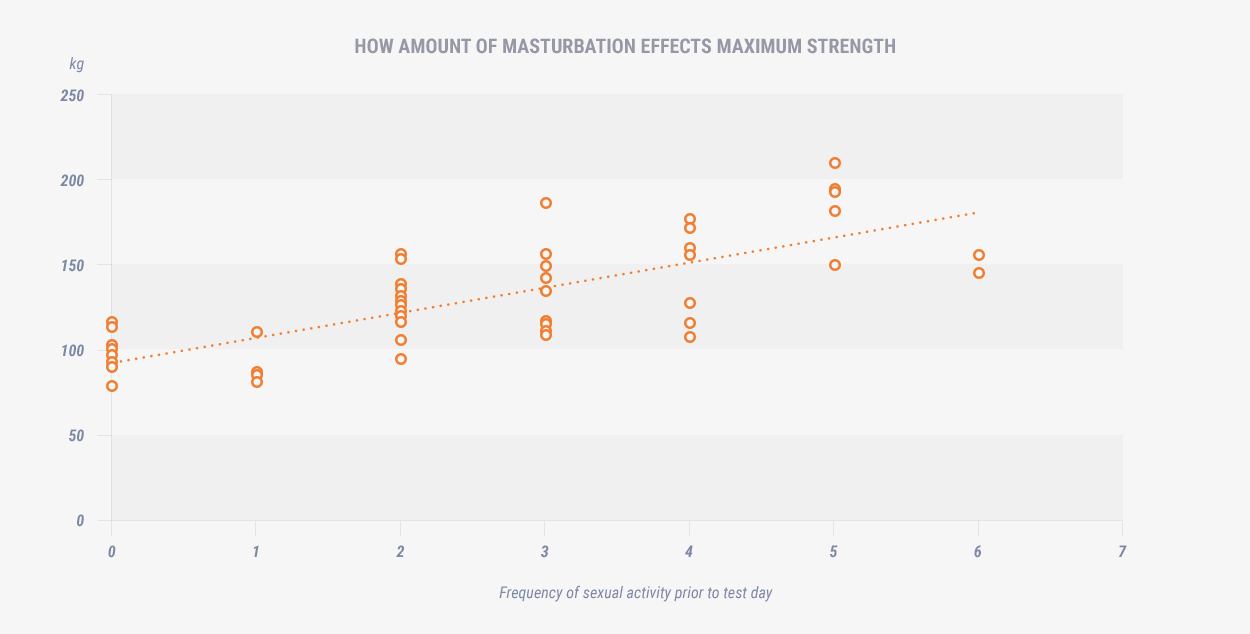 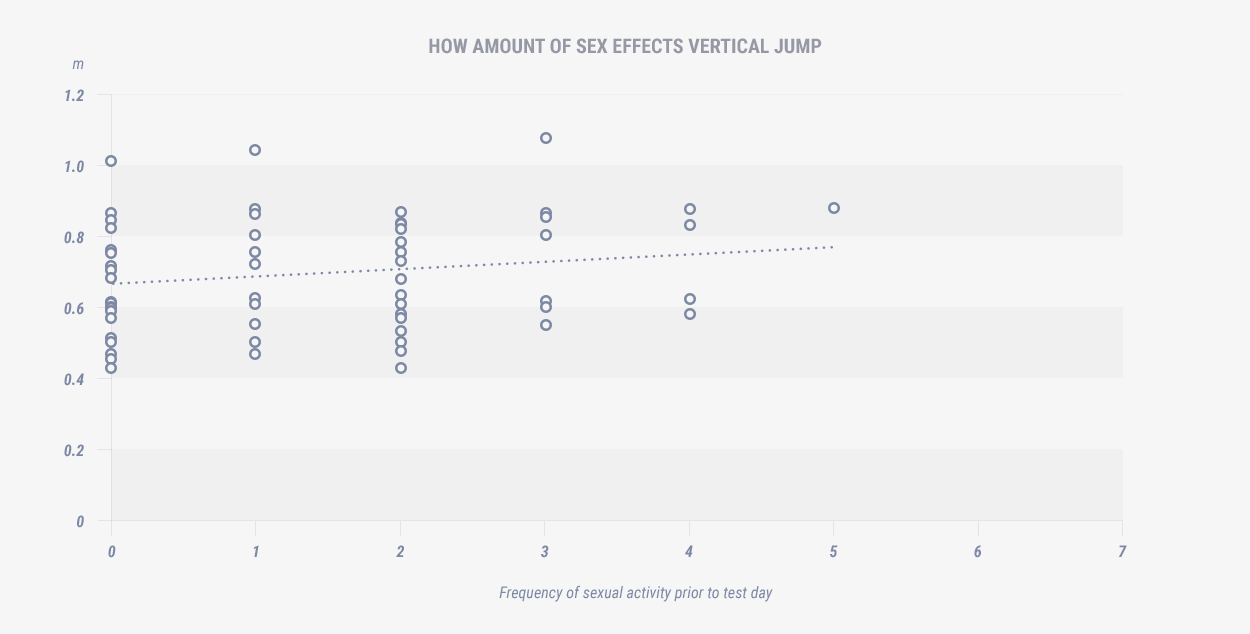 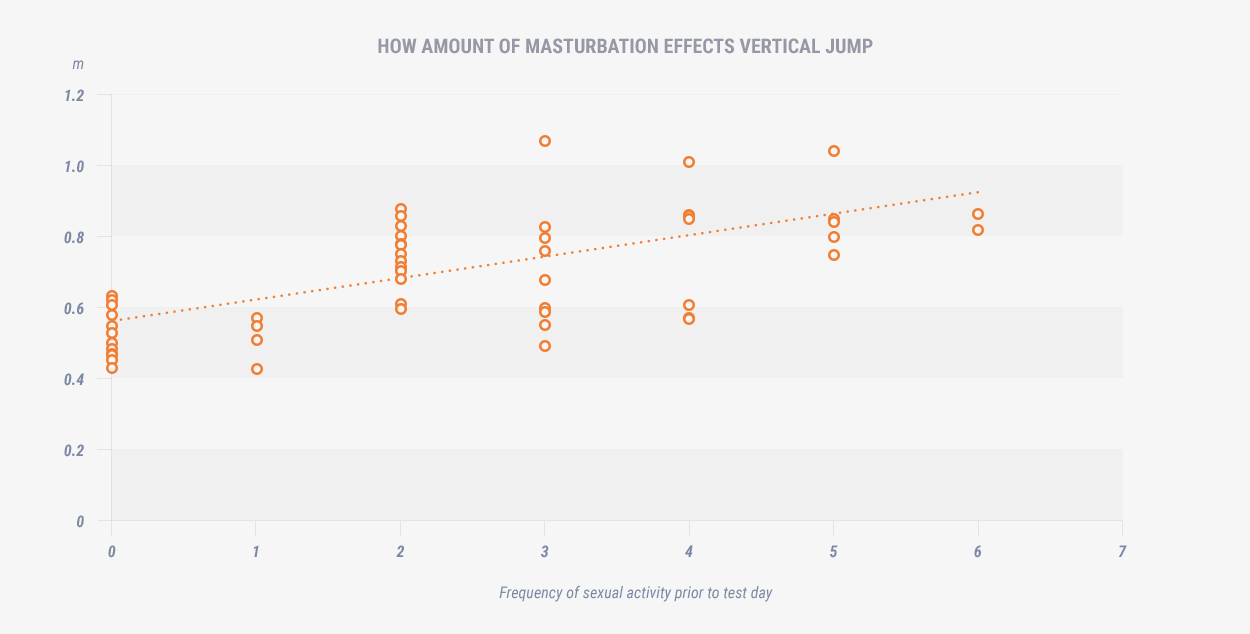 It’s fair to say that each of the 28 olympic events from Archery to Weightlifting requires a different balance of speed, agility and strength and therefore there are certain sports where sex could prove to be a valuable asset in your training planning.

With seven events split over two days, the Heptathlon is an excellent example of how you could align your sexual activity with the events which you’re due to participate in.

“These may seem like such nominal improvements that are pretty inconsequential, however at the pinnacle of sport where fractions of a second or a few millimeters are the difference between the color of your medal, any tiny advantage over your competitors is critical.”

One of the rationales behind this data could lie in the chemicals released during orgasm for both males and females. Many of these have physical and mental benefits, which if they were introduced artificially could see athletes facing lengthy bans.

It’s been suggested in studies that the combination of these chemicals and the areas of the brain which they stimulate could stop the release of a specific pain transmitter for up to 24 hours, which may help ease muscle pain or soreness.

That’s something you should seriously think about if you’re feeling a bit frustrated the day before a big game.

“The long-standing myth that athletes should practice abstinence before important competitions may stem from the theory that sexual frustration leads to increased aggression."

With testosterone being one of the main ingredients of semen, and it being proven that semen, if unused, is reabsorbed into the body, this heavily suggests that for male athletes, six days after ejaculation testosterone levels will temporarily sky-rocket before returning to normal rates.

This does seems to be a one-time shot. Leave it too long and the non-practice of sex could have a major effect on the body.

"After three months without sex, which is not so uncommon for some athletes, testosterone dramatically drops to levels close to children's levels.”

Some sports professionals suggest a regular dose of testosterone from orgasms is the best approach, ignoring the seven-day boost altogether.

"Does sex increase performance? Yes, it does, so go ahead and indulge. From a physiological perspective having sex increases testosterone levels, which causes an increase in strength, energy, aggression and competitiveness."

Combining our data with existing research, we can conclude that there can be benefits from certain types of sexual activity depending on the type of event you’re competing in. The best way to determine exactly how much of an impact you will see should be something you build into a long-term training schedule.

Sex won’t make you a better or worse athlete, but thinking about it will

In 2001, Snooker player Paul Hunter was in trouble at the midway interval of the UK Masters final in Wembley, London. Trailing 2-6 to Ireland’s Fergal O'Brien in a first to 10 contest, he and then girlfriend Lyndsey retired to their hotel room to recalibrate.

"I stripped down to my lacy g-string and bra. We made love and he didn't think about the tournament for a second."

"Sex was the last thing on my mind. I just wasn't in the mood. But I had to do something to break the tension. It was a quick session – around 10 minutes or so – but I felt great afterwards.”

He returned to the table, taking 8 of the last 11 frames to take home the title, brazenly sharing the reason for the epic turnaround in fortunes during the post-match interview to a giggling crowd.

Athletes are a superstitious bunch. If you believe something to be harming your ability, whether it’s not wearing your lucky socks or failing to follow your pre-game routine, it’s likely to be reflected on the scoresheet. Our test proves that mental attitudes towards sex has a direct impact on results in the majority of tests.

“If you feel that your sex life is having a negative impact on your athletic prowess, then there’s a high chance that it will. If you believe regular sex boosts your energy and gives you superpowers, then this can materialize in improved sporting performance.”

Beliefs around abstinence in athletics are deep-rooted, especially in certain sports. However, this is often more about tradition and distraction than actual hard facts.

For example, Muhammad Ali was said to avoid sex for six weeks or more before a bout. As such an iconic figure, it’s no surprise that many fellow fighters choose to follow his example.

“I always read that the great fighters never had sex before fights and I was a young kid and I wanted to be the youngest heavyweight champion in the world, so I restrained myself from sex for around five years.”

“We’ve talked to doctors about it. Sex lowers your testosterone, so you’re not as mean. Most boxers abstain for a week or more before a bout - I ask my guys for 10 days.”

And it’s not just in the ring where this view is held.

But what about those who have the opposite opinion? To some the thought of abstinence is totally foreign.

"One time he even told me to avoid sex. If I had followed Coach's advice though, I would have driven myself insane. I knew that every now and then I had to live fast. It was the only way for me to stay focused."

"Good strikers can only score goals if they have had good sex the night before a match. When I do it before a game I feel different. I feel lighter, my legs are more nimble."

"Sex really helps actually...before and after.”

“When I raced after sex I felt light on my feet.”

The idea of imposing a one-size-fits-all rule on a squad or team is contrary to how different individuals react positively or negatively to a bit of extracurricular activity. However, this is something that many coaches and managers often opt to do prior to major competitions. Usually this is a decision made around ensuring the those in their charge get enough bedrest, rather than anything performance related.

“There will be no sex in Brazil. I am not interested what the other coaches do, this is not a holiday trip, we are there to play football at the World Cup."

“It’s not the sex that wrecks these guys, it’s staying up all night looking for it.”

However, in probably the most publicized case of sex and sport of all time, there’s a remarkable correlation between the success of Tiger Woods before and after his promiscuity was made public.

Obviously there are many other factors to consider in this (the breakdown of his marriage, loss of key sponsorships, the rise of competitors, major surgery to repair a broken leg) however there’s a clear line that mirrors our data; prior to 2009 he viewed his sex life in a positive way, whereas afterwards he will no doubt have seen sex as more of a detrimental factor.

There’s an argument to say that the physical act of sex bares no actual relation to sporting performance, however having something playing on your mind when you’re standing on the tee or the blocks can only be a bad thing.

They say we think about sex every seven seconds - that’s a lot of negative vibes that could be entering your head as you wait for the gun to go off. Positive mental attitude is a huge deal in sport - visualizing the winning goal, seeing yourself crossing the finish line in first position, holding on to that crucial catch.

The key to a gold medal for athletes is thinking positively about their sex life regardless of how much or little they’re having - a simple compliment from their partner may be the difference that ensures a podium finish.

To ensure the results our study provided reliable data, we enlisted the help of one of the leading names in sport science, Dr. Mike Young, PhD.

As well as academic qualifications in Exercise Physiology, Coaching Science and Biomechanics Mike has coaching badges from USA Track & Field and USA Weightlifting with his expertise being featured in publications ranging from the New York Times to ESPN Insider.

Mike has coached athletes to international standard in multiple sport disciplines, as well as directing the training plans for professional athletes in the MLS, MLB, NFL, NHL and PGA.

His North Carolina training facility, Athletic Lab, is a 16,000 square foot center for athletic development, and sport science excellence. Featuring laser timing systems and the latest high-end equipment, it provided the ideal environment for our study.

How the data was collected

“I wanted to use people who already knew what it takes to be an athlete - people who were used to training daily who we would be able to monitor for even the smallest differences in their results.”

The subject pool of 21 college or national level athletes currently competing in the sport of Athletics were tested and surveyed over the course of three weeks under equal conditions at the Athletic Lab. The 11 males and 10 females were all heterosexual and specialized in a mix of sprinting and jumping events.

A series of simple exercises were chosen based on their suitability for providing clear metrics to benchmark against.

After each series of weekly tests, participants completed an anonymous online questionnaire that was cross-referenced with their test data via a coding system.